Wednesdays with William – Let Me Please

He’s three – a new three just under a week. It’s sinking in that my baby is growing up and wants to do things by himself. Now, this of course only applies to when he wants to do it versus when he will say very quickly, “Mommie help. Mommie do it.” These are the times when I have to resist that sweet voice and push him to do it especially if I know he can.

However, the other times when he insists, “Let me hold it. Pleeeaaassseee.” That sweet voice again pleading for a chance to show he can do it and to give him some control warms my heart and waters my eyes. His growing independence reminds quickly how fast time flies and that I want to make time stand still just for a little while so I can love on my baby – while he’s still a baby!

Now, the one thing William (my sweet baby) needs to do quick is use the potty like a big boy. This is the worst and I’m so responsible for some of the slack. I mean I want to put him in the thick underpants so he can know that being wet isn’t cool. It’s like a really good way to get it done when you’re home playing with cars and magnet tiles. The problem is I have carpet and urine isn’t the fragrance I want AND my baby drops boulders that already take me out when changing his pull-ups. I can’t imagine having to deal with it in underwear. No judgement ok – it’s tough. He will use the potty sometimes and we celebrate like former President Baraka Obama just won the 2020 election. It’s a major production ESPECIALLY in the mornings when he didn’t use the pull-up but woke up asking for the potty. You would think we won the lottery! At any rate, I’m working on it while William is still making up his mind if being a big boy is worth that sticker, fruit snack, or time on the tablet. Keep us in prayer! 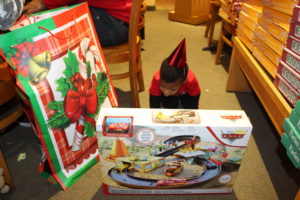 , we celebrated William’s 3rd birthday at his favorite pizza spot with his favorite (and only) godsisters. It was a small gathering for less than a dozen and it was perfect! The best part was the gift from his Uncle Reggie – a car racing track. We weren’t ready with the video when he jumped over the bike box, struggled  to pick up the car racing track box, and said, “Oh, WOW. Oh, WOW.” The joy in his voice and the look on his face captured the night – we were happy because William was most definitely happy!

Until next time, I’m still William’s Mommie and that makes life so sweet!

Comment. Share. Pray. Just no judgement, harsh opinions, or request to watch PJ Masks (I’m officially caught up on every episode every made. ALL of them.)